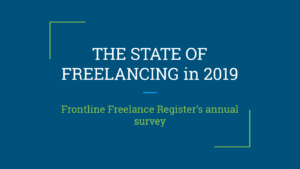 FFR announced at the Global Conference on Media Freedom on 10 July, the preliminary results of its survey – The State of Freelancing in 2019. The survey canvassed freelance journalists who are exposed to risk about their work practices and safety concerns.

Over 380 freelance journalists from 70 countries participated, making it one of the most wide-reaching surveys of its kind.

A strong theme that emerges from the results is how financial considerations directly impact a freelance journalist’s ability to report safely.

FFR has always equated fair and timely pay with safety. For freelancers, payment terms aren’t merely an employment issue — when you’re working in dangerous places, delays in payment can be a matter of life and death.

Foreign affairs reporting is expensive — equipment, training, insurance, travel, fixers, drivers and accommodation can run into the thousands for a single job. Often it needs to be paid in advance by the freelancer. When freelancers aren’t paid on time, they can be forced to cut corners on safety because they don’t have the cash reserves to hire the best driver, or to stay in the most secure hotel, or even to pay for war zone insurance.

The results of the survey bear this out: nearly 70% of freelancers do not take out insurance and cite affordability as one of the main reasons is that it is too expensive.  Over half of those surveyed have not undertaken any type of safety training, and of those that have, 75% have not taken any refresher courses to keep their safety training up to date.  65% do not own their own personal protective equipment.

Given these statistics, it is not surprising that over 75% confirmed that financial considerations have had a direct impact on their safety when working.  The comments received give real life examples of why this has been the case, and they include:

The full,  detailed report, including recommendations, will be published in September following a period of consultation with stakeholders and partners.  If you wish to contribute to the consultations, receive the report once published or attend its launch, please contact FFR’s director Sarah Giaziri on sarah.giaziri@frontlinefreelance.org